Meredith and Austin Lenox got married May 2 in Oxford, and their would-be wedding guests gave them a grand send-off parade. Photographer Lindsey Meisenheimer captured the joy of the day.

“My goal is to adapt seamlessly and provide the same level of excitement, love and enthusiasm whether there are 8 or 300 guests on their very special day,” Meisenheimer said.

When restaurants and parks temporarily closed and human contact with others was limited, folks were forced to think outside the box for special celebrations. And they’ve risen to the occasion.

Despite these coronavirus-riddled times, the human spirit has successfully soared, leaving fear and frustration in the dust as life continues to happen.

Good news greeted Joey and Delaney Bates in August when they learned Delaney was pregnant with the couple’s first child. The due date — May 2.

The couple — he’s a Tupelo native, she’s from outside Chicago — met as Ole Miss students. They will have been married two years in June. Joey is a minister on staff at The Orchard; Delaney is an assistant teacher of fourth-graders while working toward her full teaching certification.

Little did the couple know in August the final months of Delaney’s pregnancy would be affected by the coming of COVID-19 and a quarantine.

Of course, staying at home was something about which the couple became very serious.

“I asked my doctor, and she said we should just take things day by day,” Delaney said.

And that’s what they did. In the weeks leading up to the birth, there was plenty to do, like setting up the nursery and figuring out what their new routine with a baby would look like.

The original plan was for her parents, Tom and Kathy Bondi of Downers Grove, Illinois, to be in Tupelo for the birth, but the quarantine forced some changes. So did the baby’s insistence at making an early arrival. Kerrigan Louise Bates made her way into the world on April 13 at 3:03 in the afternoon.

The couple had chosen to be surprised by their baby’s gender. When their daughter was born, they sent a text to family members announcing the arrival of a baby. Later, in a Zoom call, Kerrigan’s mom and dad revealed, “It’s a girl.”

“It was a surprise for everybody,” Delaney said. “My parents came and they saw her — from a distance — the day she came home, but Joey and I are the only ones who’ve held her. My in-laws — Toby and Cathy Bates of Meridian — have visited, and we’ve sat on the front lawn with our chairs spaced appropriately.”

Technology has helped Kerrigan’s grandparents and others from feeling too left out.

“We Facetime both sets of our parents every night, and we are thankful they can ‘see’ her everyday,” Delaney said. “My brother lives in New York, so we have Facetimed him as well, along with different friends.”

Though she’s looking forward to the day family and friends can meet Kerrigan in person, Delaney said this time in quarantine with a new baby has been good.

“I look at this season as a time when the three of us are getting to learn each other and be together as a family,” she said.

The new parents have not suffered from boredom during quarantine. Taking care of a new baby offers plenty of tasks to be done. And there’s always the fun and awe a baby brings.

“We have spent a lot of time just looking at Kerrigan in amazement that she’s here and she’s ours,” Delaney said. “We also have been going out on walks when it’s nice out and watching Netflix — and taking naps when she’s sleeping.

“I hate the circumstances of how our world is now, but being here together, just the three of us, has been such a sweet, sweet time. But we cannot wait to show her off a little when that day comes.”

On April 10, Catherine Alderson of Oxford awoke to a special day. It was her birthday, and she was 100 years old.

“Normally, when we have family celebrations, we all get together and go out to eat at Toyo (Japanese Sushi Bar & Hibachi),” said Randy Leister, market president of BancorpSouth in Oxford and one of Alderson’s three grandchildren.

However, because of the coronavirus-caused quarantine, that was not an option for this year’s birthday. But that did not stop the family from marking such a momentous occasion for their beloved matriarch.

Until six months ago, Alderson continued to live alone in her home, but these days her daughter stays with her.

Born in Paris, Mississippi, Alderson lost her mother to pneumonia when she was 6 years old. Her grandson said she became mama of the house to her five siblings. She quit school in the 10th grade.

“Her family was poor, and she had only one dress,” her grandson said. “She was embarrassed by that. So she quit and helped her dad on the family farm.”

Alderson worked as a seamstress at Big Yank Corporation in Water Valley for years until arthritis forced her to retire from there in 1976. She sewed inseams in blue jeans, with a quota of 18 dozen pairs each day. That’s 216 pairs of jeans every day. 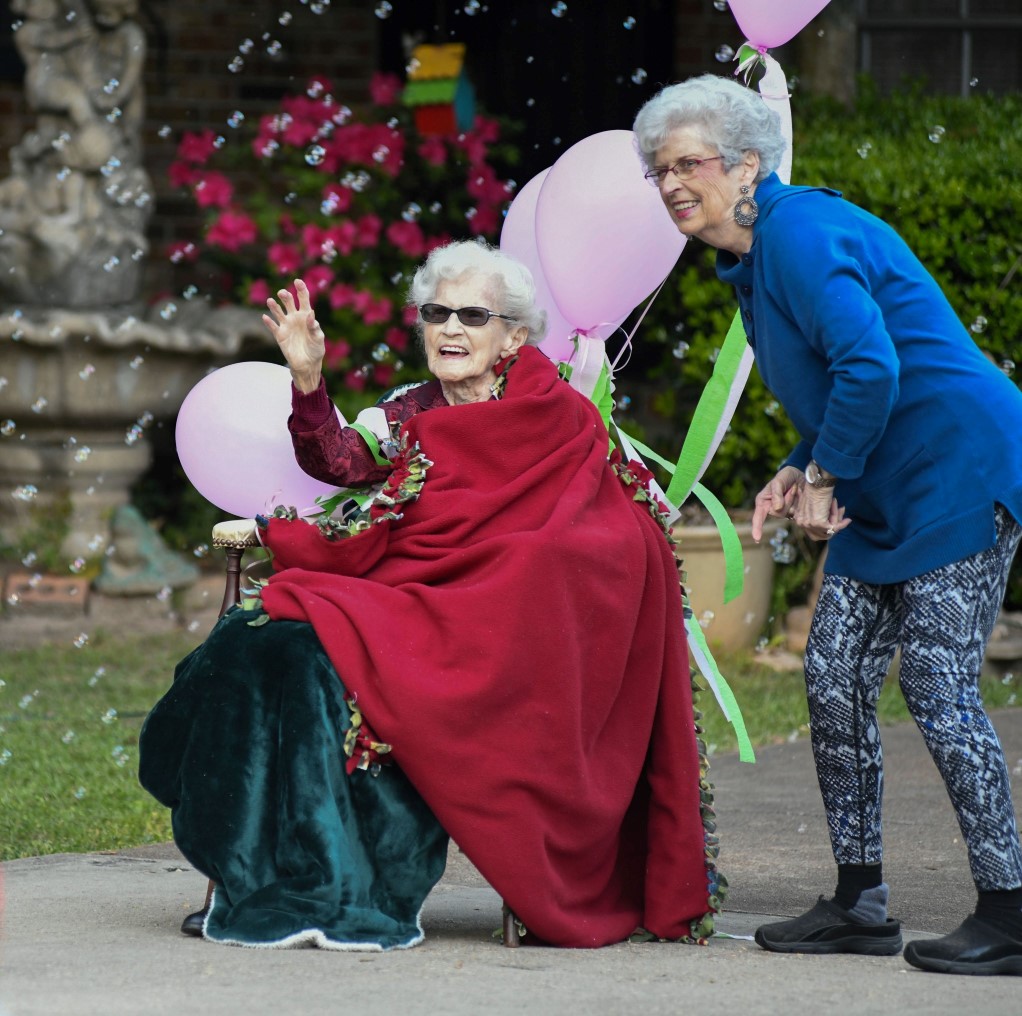 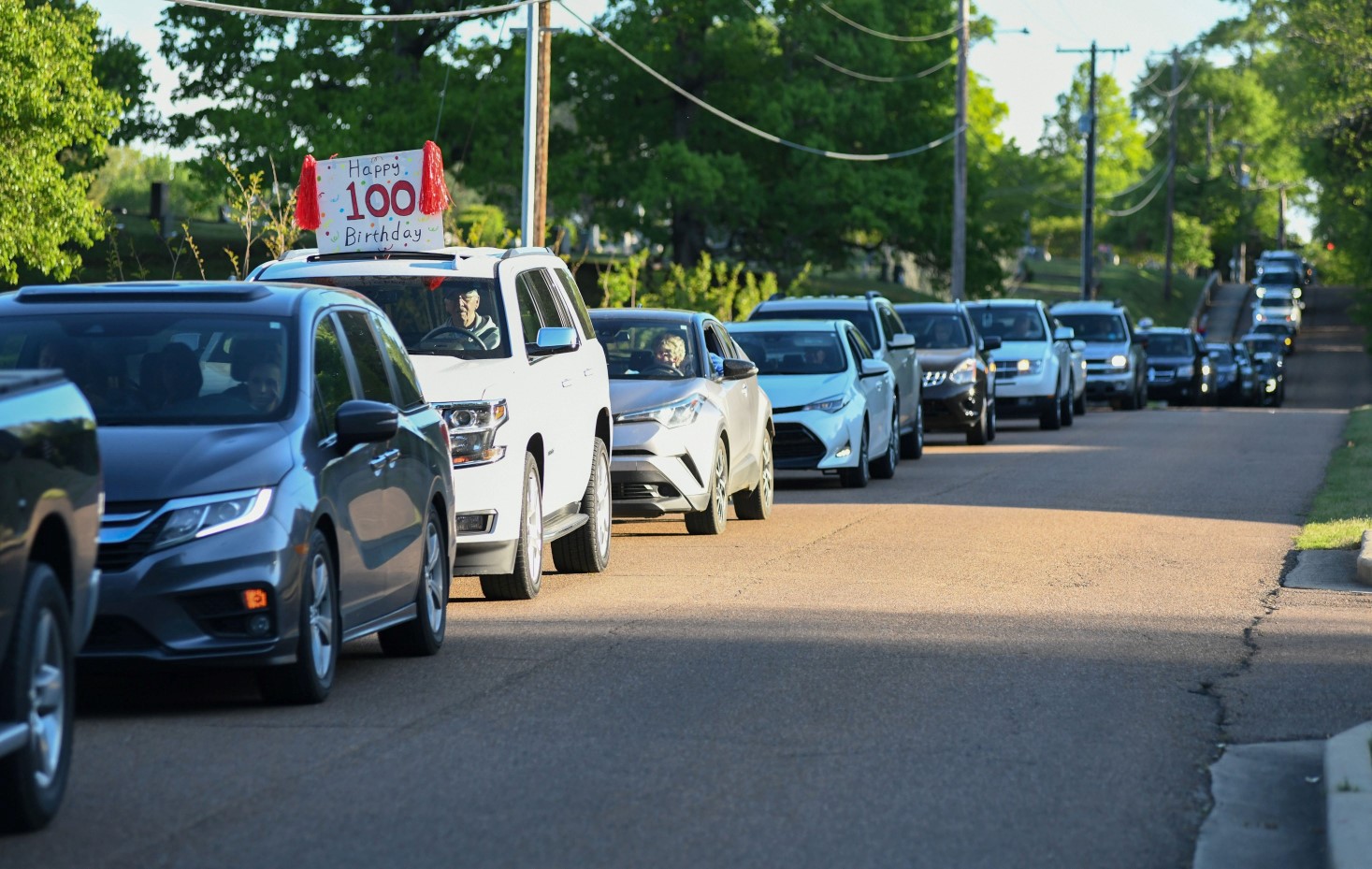 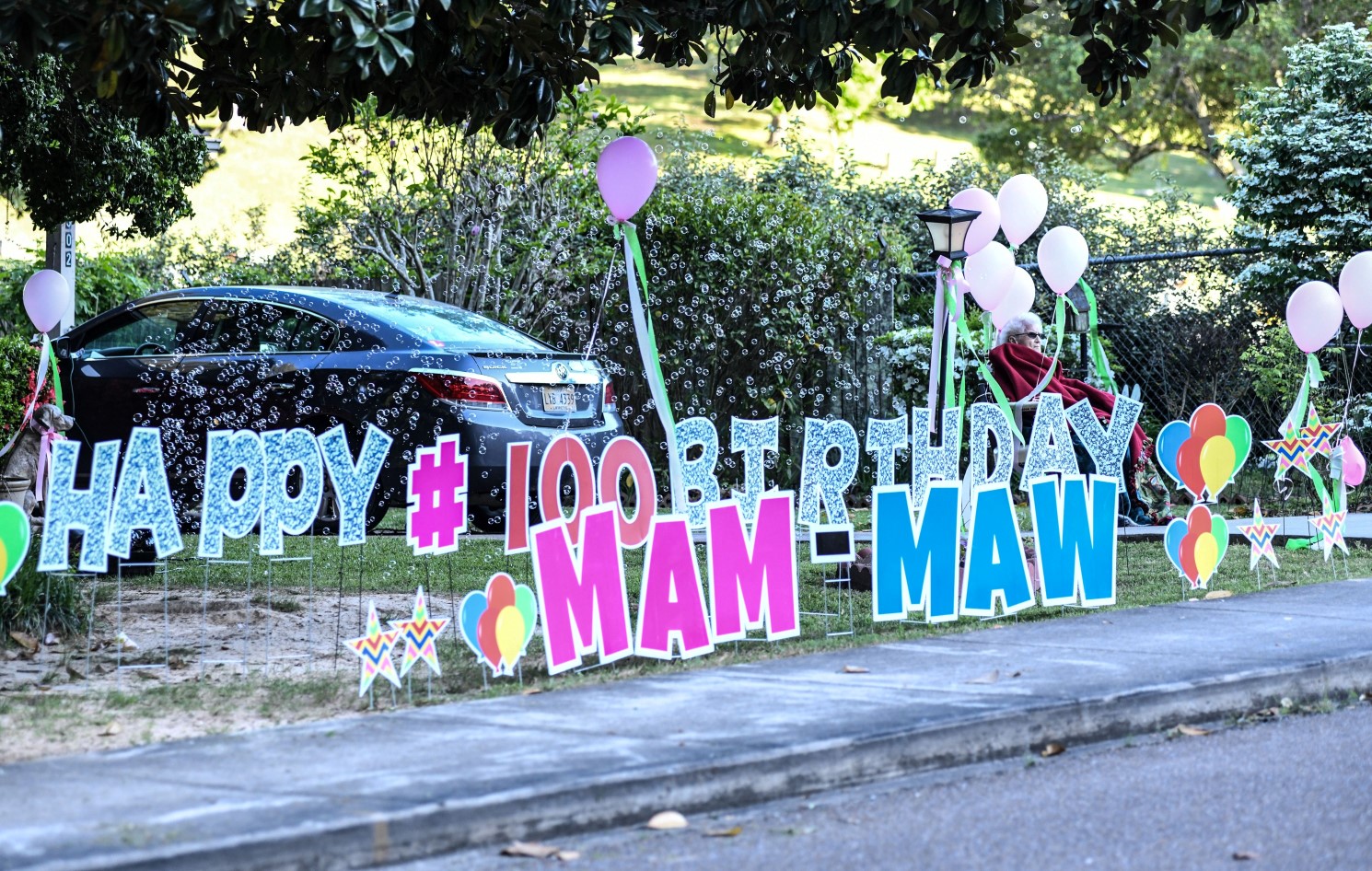 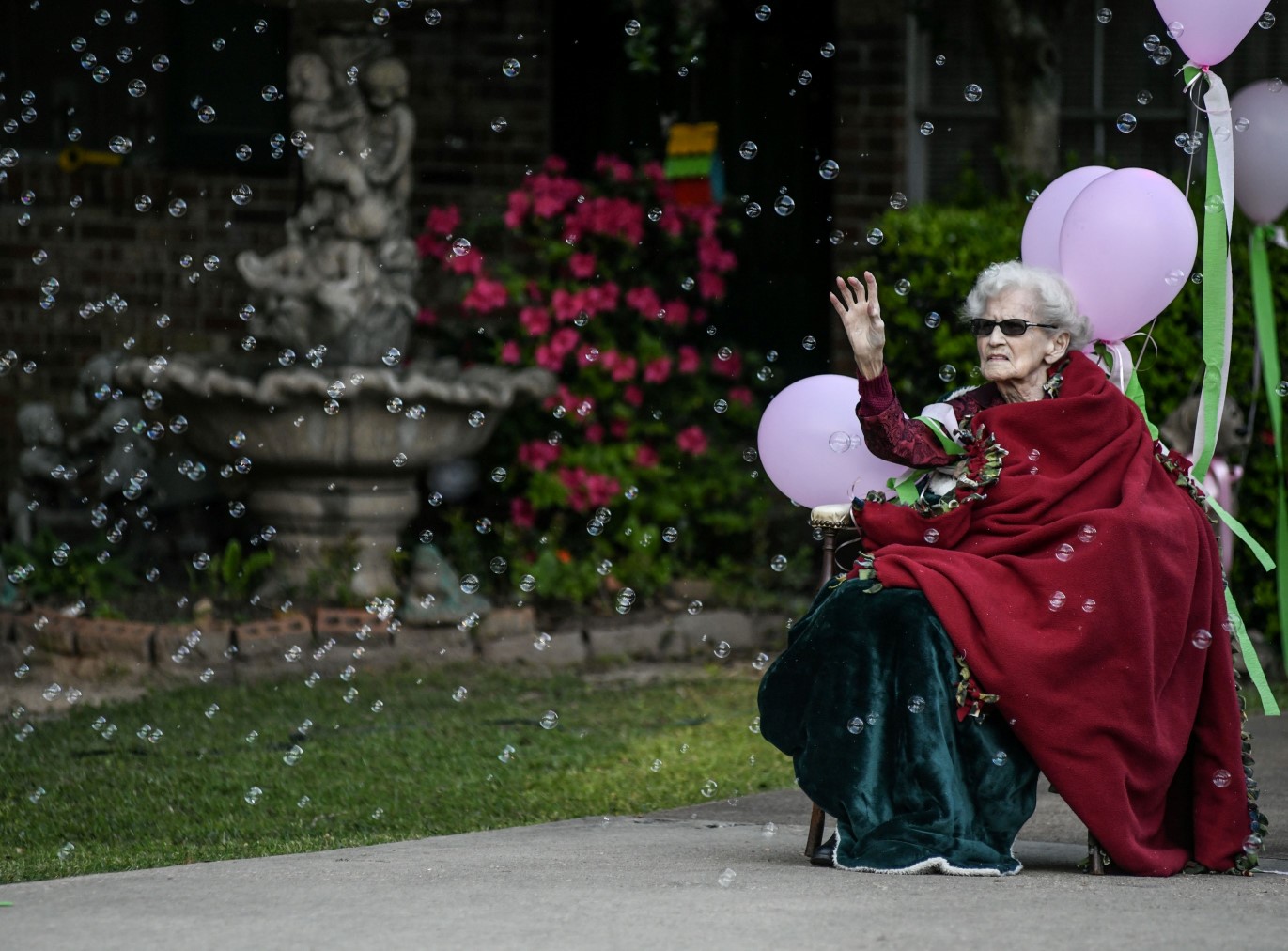 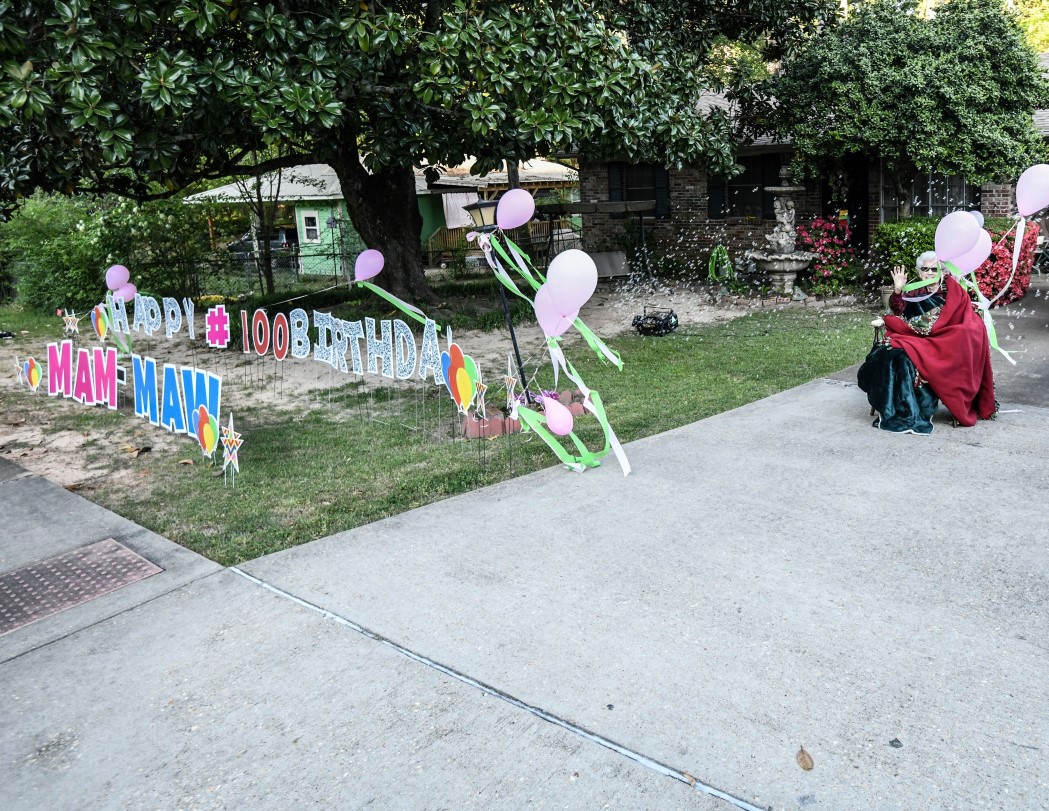 Her banker grandson loves to tell the story about having to help his grandmother obtain a credit card when she was 76 years old. Alderson had become interested in the Home Shopping Network but could not make purchases because she had no credit card.

“When she tried to get one, she couldn’t because she had no credit,” Leister said. “My grandparents never borrowed a dime. They paid cash for what they had. So, when she asked me, I did what I could to help her get her very first credit card.”

Through the years, Alderson has devoted time to a few of her favorite things.

“Working in her yard with her flowers has kept her going,” Leister said. “And she loves basketball. She has had season tickets to Ole Miss basketball games for years.”

In fact, Alderson was honored in December at an Ole Miss game.

“She was so excited,” her grandson said. “Of course, she had to go to the beauty parlor and get all fixed up to be recognized at the ballgame.”

Clearly, someone so beloved by the Ole Miss basketball and Oxford communities was deserving of some sort of birthday celebration.

So, Randy Leister and other family members took to Facebook, making folks in the Oxford area and beyond aware of Alderson’s upcoming birthday.

“We thought Mammaw — that’s what we call her — could sit in the driveway of her home and people who wanted to could drive by to wish her a happy birthday,” Leister said. “We really had no idea how this would turn out.”

After hearing from quite a few people who planned to join the drive-by birthday parade, Leister called the Oxford Police Department to let them know there might be a large number of cars coming by.

At 6 p.m. that Friday, Alderson sat in her driveway, surrounded by pink balloons, bubbles from a bubble machine and other festive decorations, as cars lined up from the corner of Jefferson Avenue all the way up North 16th Street to Alderson’s Avent Street home. The parking lot of Bramlett Elementary School was filled with well-wishers, too.

“It was amazing,” Leister said. “And part of the parade consisted of vehicles from the police and fire departments with their sirens and lights. Close to 100 cars came by. The owner of Toyo even came by. When it was done, I asked her if she’d enjoyed her birthday parade.

“She said, ‘I think that was better than going out to dinner.”

When Nicole Baker was a freshman at Lafayette High School in Oxford, her path didn’t really merge with that of Reed Davis. He was three years older and about to graduate. But a few years later, when she was a 10th-grader, Baker became best friends with Cori Davis, who happened to be Reed Davis’ sister.

“At first, when I started coming around Cori’s family, I didn’t think twice about Reed,” Nicole said. “I was just like, ‘Oh, cool, you’re the older brother who’s in college.’ But things started to change when we actually acknowledged each other and began to speak to one another.”

In 2013, seniors Nicole and Cori were homecoming maids at Lafayette High School. Reed Davis was present to support his sister.

“That was when the feelings sort of sparked,” Nicole said. “Still, it was a tricky situation — he was my best friend’s brother. But you can’t fight what’s meant to be. We started dating in 2017.”

The two excitedly began the task of planning their special day. They made deposits, confirmed honeymoon plans, prepared for their bachelor/bachelorette trips. Reed’s trip went as planned, just before COVID-19 changed everything.

“We had to cancel my bachelorette trip to Nashville, our honeymoon and the wedding we’d been planning,” Nicole said. “But we kept our wedding date the same — it was the one thing we could still control in all of this chaos.”

Imagine planning a wedding celebration as the rules of life continued to change almost daily regarding the number of people allowed at gatherings, social distancing and sheltering in place. The planning, in fact, became more specific, more intentional.

Thought was given to having the wedding outside at the Davis family farm, but Nicole and Reed ultimately decided it would be at Oxford Church of Christ, just off the Square. With the place chosen, the couple commenced to their most difficult challenge: selecting the handful of people who could actually attend the ceremony in person.

“I was so upset,” Nicole said. “You know every girl dreams about this day, and my day had finally come. I felt like the rug had been ripped out from underneath me. How do you pick seven people from both our lives to attend? That part was awful.”

Despite the disappointment, the ultimate “guest list” seemed perfect, with the few in attendance pulling double duties. Cori Davis Andrews, best friend of Nicole and sister of the groom, was matron of honor and photographer; Will Andrews, husband of Cori and a groomsman, also served as the sound tech and handled the music; Annalee Davis Quarles, Reed’s youngest sister and a bridesmaid, was in charge of videoing the live stream, and, perhaps most importantly, Dale Davis, Reed’s dad, performed the wedding ceremony.

The wedding ceremony was live-streamed on Facebook and watched by a select group of about 95 friends, including Nicole’s grandfather, Dr. Bill Baker; her stepmother, Brandy Baker; and Reed’s grandmother, Patsy Johnson.

After the service, the couple had dinner at the Davis home in place of the usual reception. But hopes are high that the newly married Davises will kick up their heels in the future at a big reception that can be safely attended by many.

In the meantime, Reed stays busy as a machinist/engineer at his family’s business, Davis Tool & Die Inc., and Nicole will be entering the dental hygienist program in the fall at Mississippi Delta Community College in Moorhead, Mississippi.