The annual meeting of rivals Ole Miss and Mississippi State has played out on the gridiron for more than a century.

The rich, intense and colorful 116-year history of the Ole Miss-Mississippi State football series — known as “The Egg Bowl” — is a drama that has been going on for over a century.

The rivalry between SEC members Ole Miss and MSU is the 10th longest uninterrupted series in the country, with the first matchup in 1901, in which the team then known as the Mississippi A&M College Aggies beat the Ole Miss Red and Blue, 17-0.

The teams took a three-year break from their annual meeting on the field from 1912 to 1914, before resuming in 1915. Since 1915, the rivals haven’t missed an Egg Bowl, except for 1943, when neither school had a football season because of World War II.

The game was played at Mississippi Veterans Memorial Stadium in Jackson from 1973 through 1990: the large venue could handle seating for the massive crowd. Later, Ole Miss’ Vaught-Hemingway Stadium and MSU’s Davis Wade Stadium expanded and updated, making them better able to accommodate the crowds.

The rivalry through the years has been one of great intensity. Historically, MSU dominated the early years, but in 1926, Ole Miss put an end to its lengthy losing streak with a 7-6 win. The excitement of the Red and Blue was such that frenzied fans rushed the field and attempted to dismantle the goalposts. MSU fans defended their property with wooden chairs and injuries were reported. 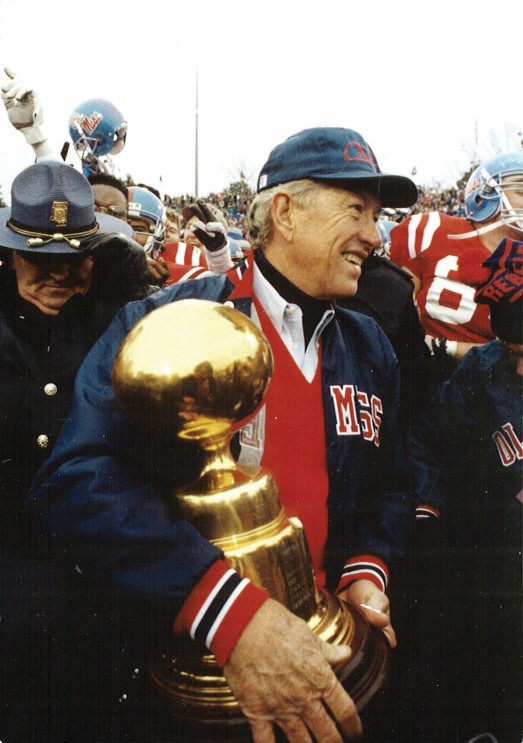 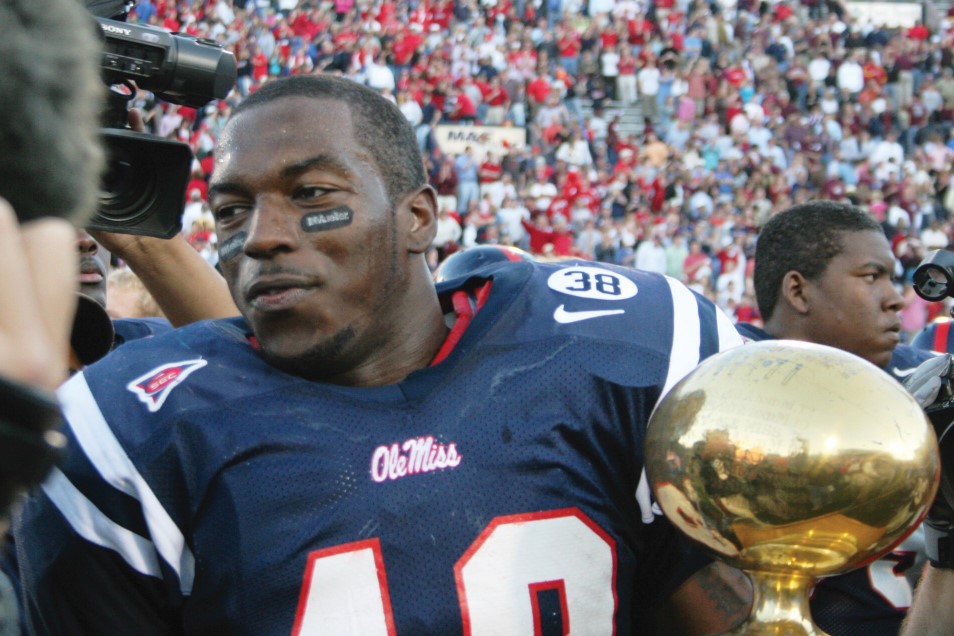 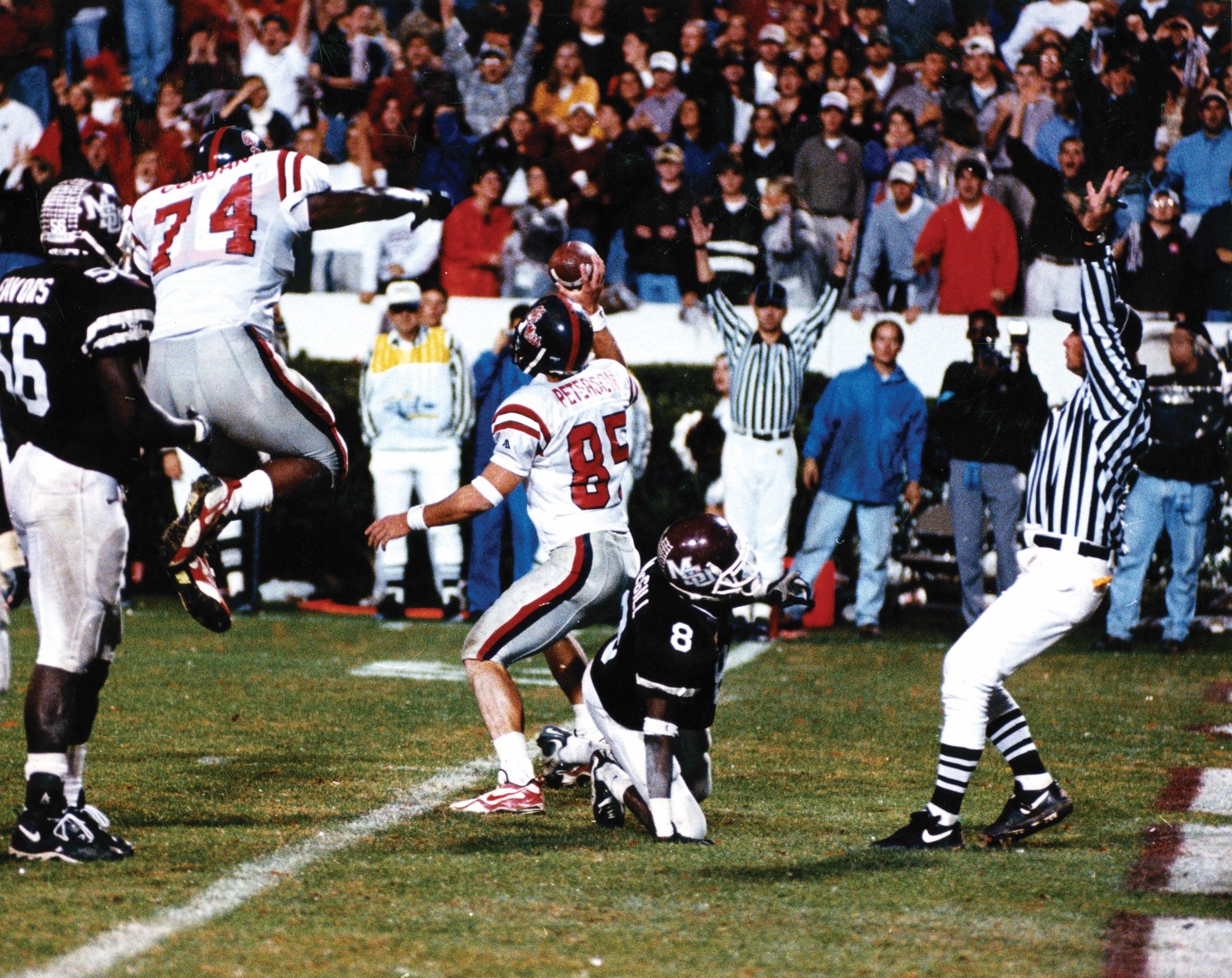 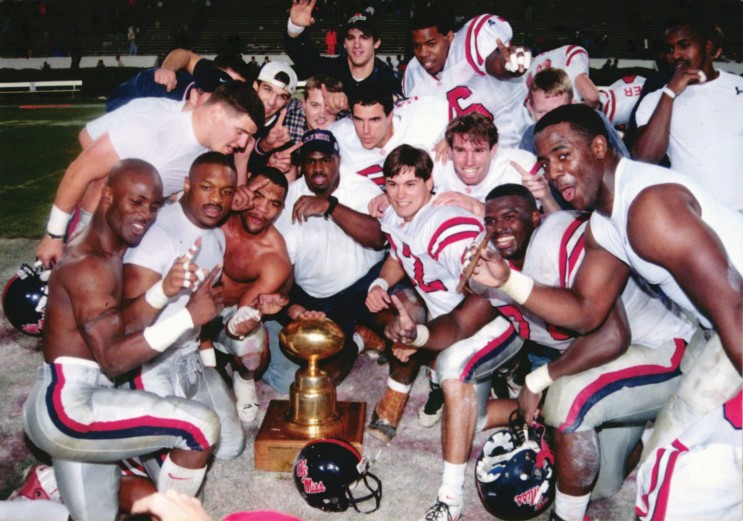 Because of the post-game fighting in ’26, a group of students from Ole Miss and MSU met and created the Golden Egg trophy to be awarded the winning team, a tradition that has continued since 1927. Footballs used in the ’20s apparently resembled balls used today in rugby — more egg-shaped and less pointy on its ends. Thus, when many first saw the trophy, it did look more egg-like than football like. The annual game became known as the Egg Bowl in 1979, thanks to Tom Patterson, a sportswriter for the Clarion-Ledger newspaper. Before then it was simply referred to as the Mississippi Football Classic.

One particularly dramatic game, the 1983 “Immaculate Deflection” game, was won by Ole Miss, 24-23, in Jackson. That afternoon, MSU kicker Artie Crosby watched his late-game 27-yard field goal attempt blown back at the crossbar by a sudden 40-mile-per-hour gust of wind. The win, and wind, secured the Rebels a postseason bowl game.

Ole Miss leads the series 62-46-6 through the 2019 season. On the field, since 2010, MSU has won six games and Ole Miss four. However, the Rebels had to vacate two of those wins as a part of NCAA sanctions against the program. The Bulldogs have won the last two meetings. The Rebels last win was in 2017.

Legendary Ole Miss head coach, the late John Vaught, thought so much of winning the series, he assigned one of his assistants to attend every MSU game during the season. His record against the Bulldogs was 19-2-4.

“It made the offseason sweeter if you beat (State),” he said. “There were a couple of times when we won, (but until then) we felt like we didn’t have a successful season. One year we beat Alabama and then beat State at the end of the year, but (still) our record was only 5-6.”

Last season’s Egg Bowl saw a finish for the ages at Davis Wade Stadium in Starkville. With a national TV audience watching, the game (a 21-20 Mississippi State win) came down to one player’s inappropriate reaction to a play and a missed extra point.

The touchdown should have led to a 21-21 tie and overtime. Instead, Moore was called for an unsportsmanlike penalty following an indecent celebration in the end zone. A 15-yard penalty was applied to the extra point kick attempt, which was missed by kicker Luke Logan from 35 yards out.

Instead of a tied score and an overtime game, MSU celebrated a joyous victory. The loss led to the firing of Ole Miss coach Matt Luke, whose team finished the season 4-8 overall and 2-6 in the SEC. MSU, which clinched a postseason bowl bid, improved to 6-6 and to 3-5 in the conference. Oddly enough, the Bulldogs fired their second-year coach, Joe Moorhead, following the team’s postseason bowl game loss.

“With these two new coaches, football in Mississippi will not only be better, it will definitely be entertaining,” said Gregg Ellis of Tupelo. “And not just on the scoreboard.”

Ellis has a unique perspective of the rivalry. He attended both schools as a student and graduated from Ole Miss. He later was a beat reporter covering both programs for the Tupelo-based Northeast Mississippi Daily Journal. He served for 10 years as MSU’s associate director of athletic media relations and worked in Ole Miss athletic media relations as a student. He is currently director of communications for Tupelo Public Schools.

He believes the addition of Kiffin and Leach could create a healthier rivalry.

“It will be a welcomed relief in this rivalry to have coaches who actually respect each other.”