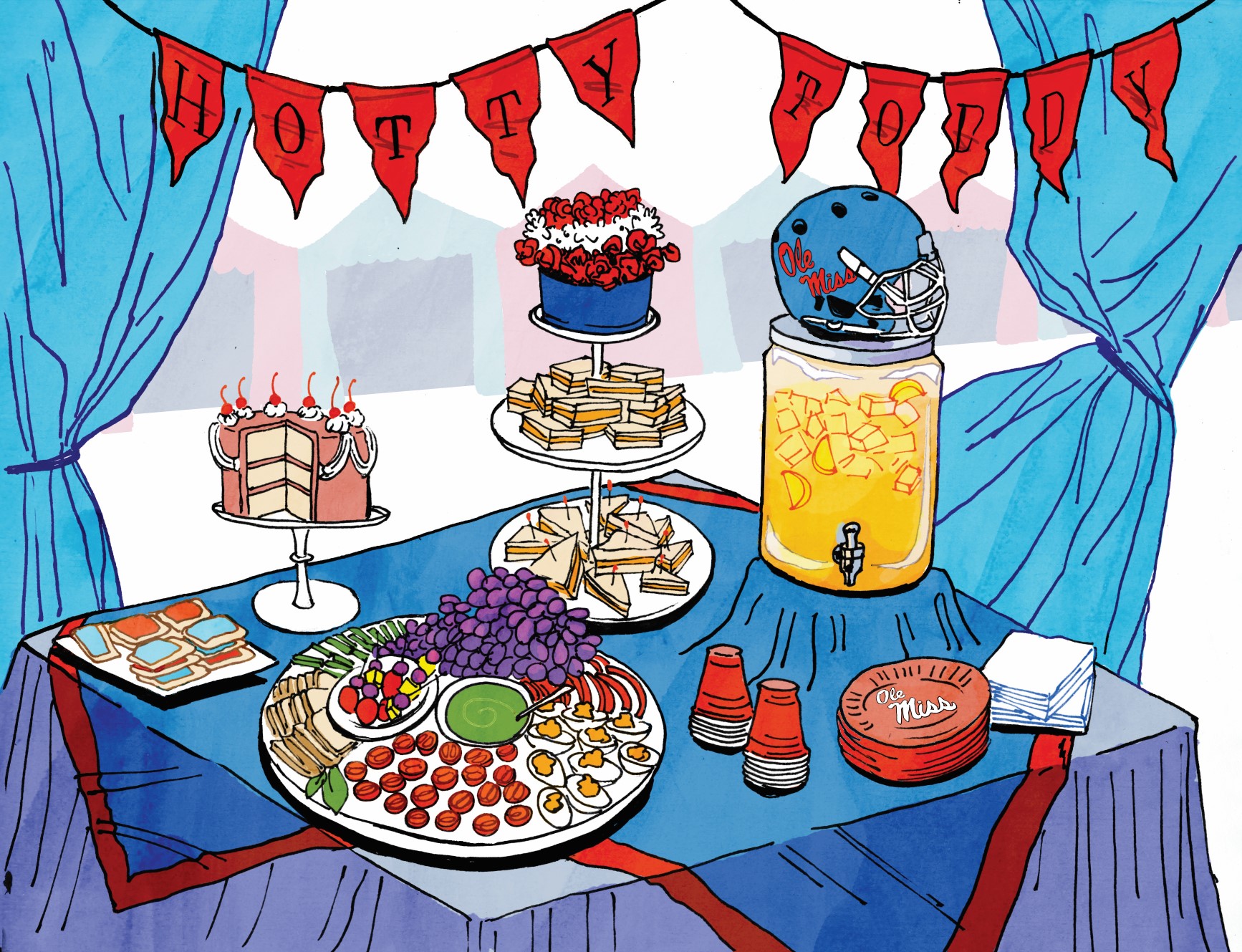 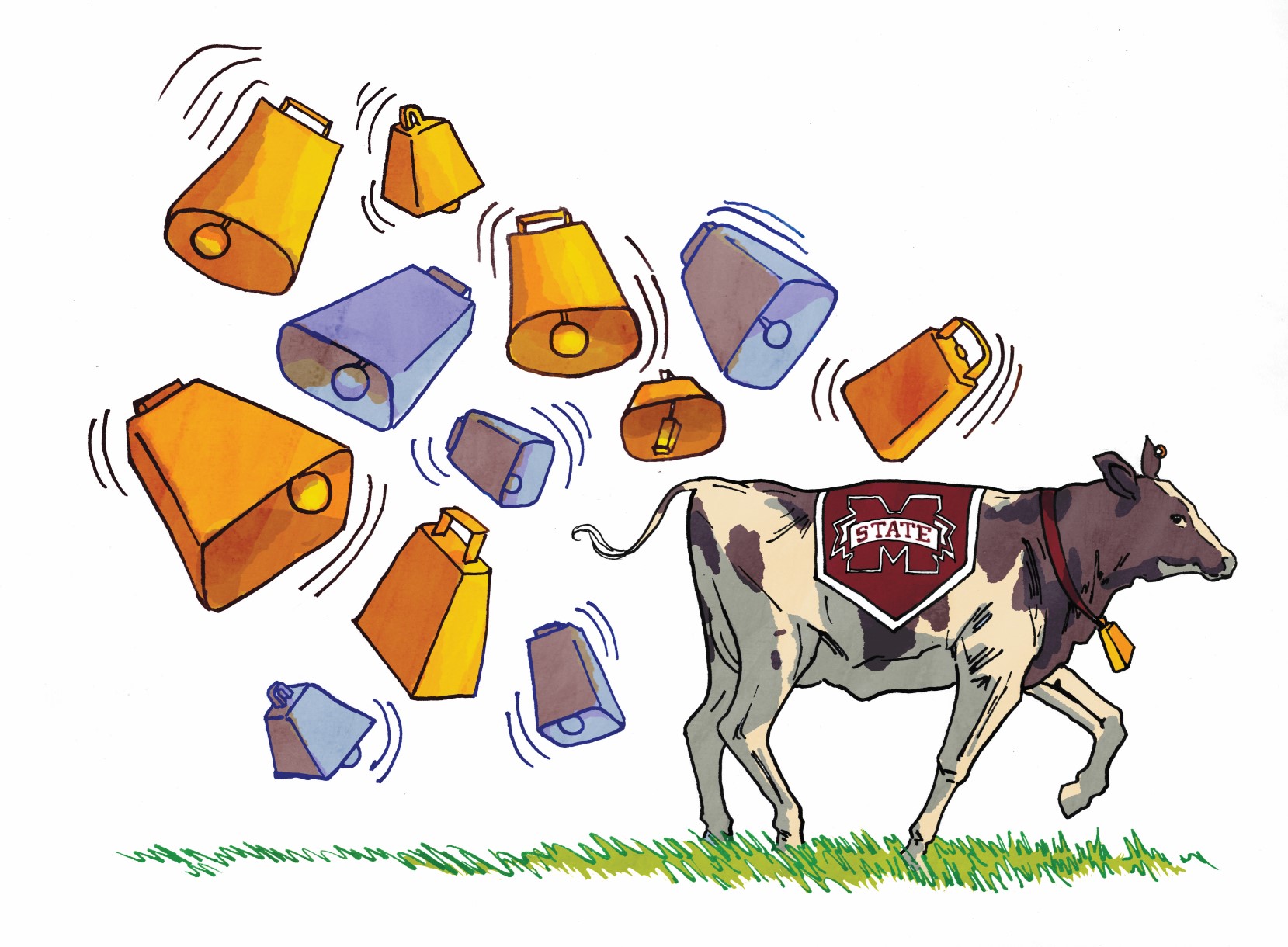 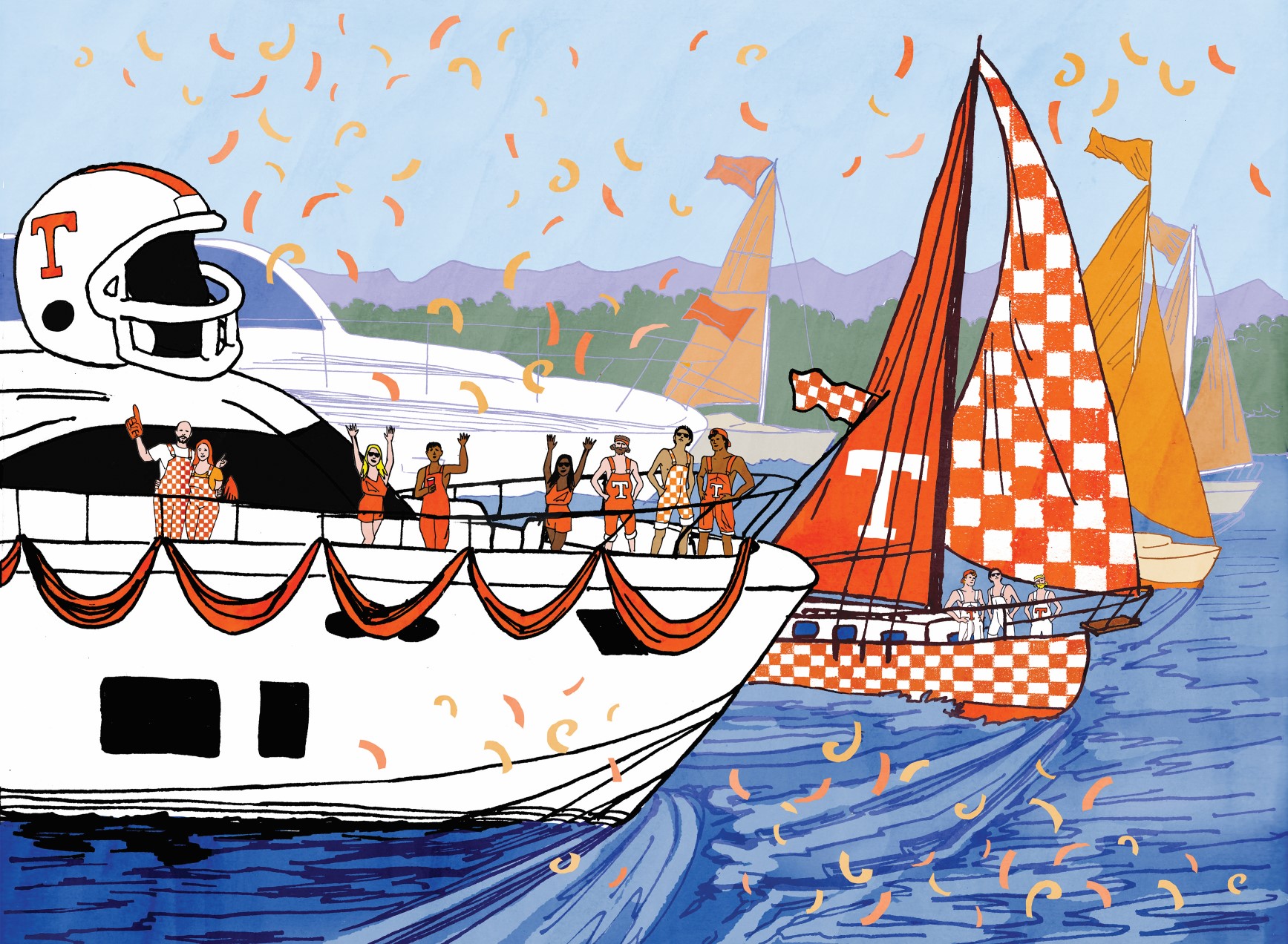 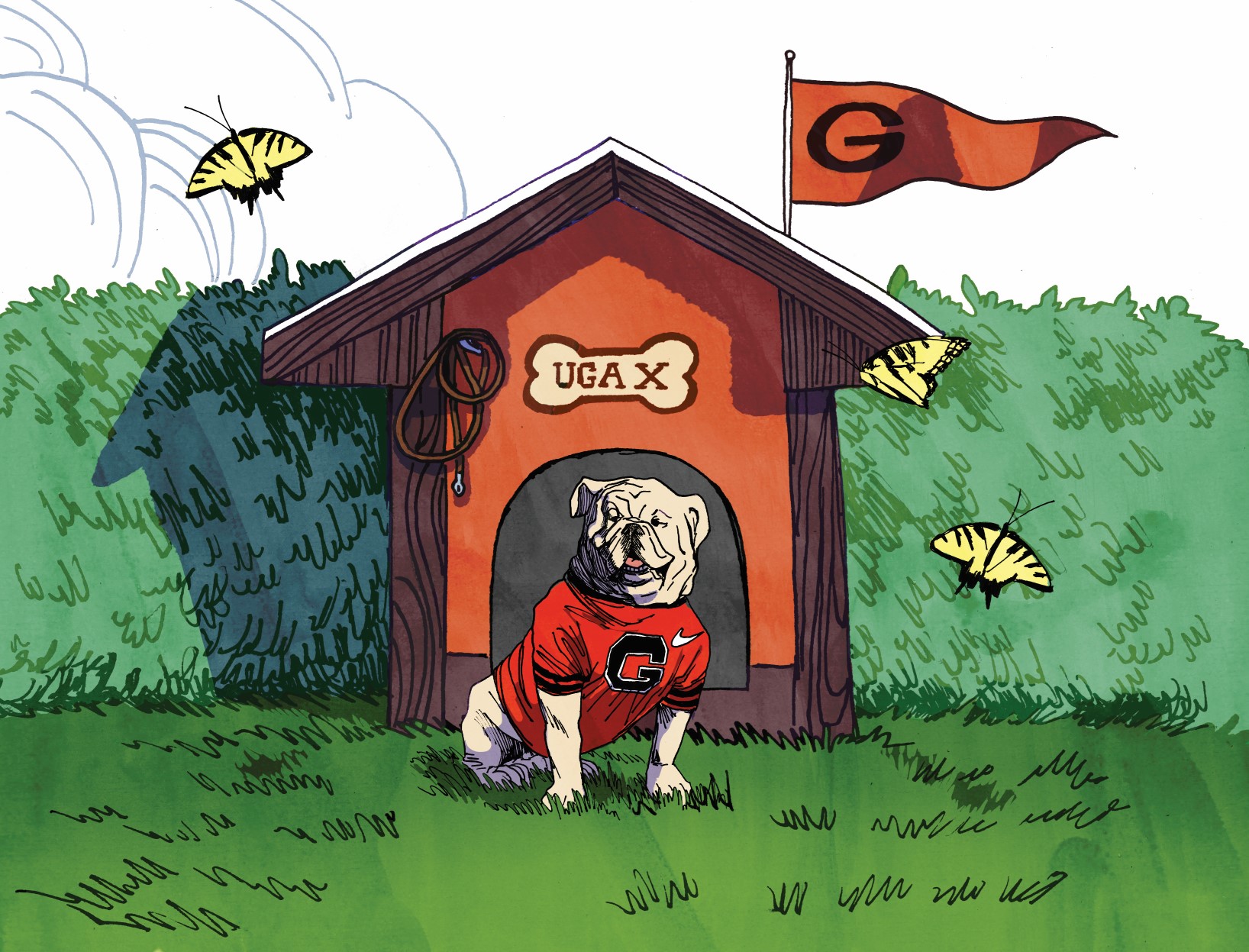 Football in the South has been compared, often in jest but sometimes in earnest, to religion. No matter one’s age, gender, profession or politics, true believers live and breathe the game. Even those who may be gridiron challenged can likely reel off with great ease a list of longstanding traditions associated with football, most especially the lively and loyalty-building traditions of the Southeastern Conference. Some of those time-honored SEC traditions include:

On home-game Saturdays at the University of Mississippi, the Grove is the place to be, often for as many as 100,000 tailgaters. The Grove, for any unschooled, is the majestic, tree-filled 10-acre center of the Ole Miss campus where, since the 1950s, folks have gathered in a pregame tradition ranked by Sports Illustrated as the No. 1 tailgating spot in the country.

Vehicles, from which fans tailgated in the early years, were prohibited in 1991. Since then, red, blue and white tents pack the Grove, some decorated to the hilt with chandeliers and candelabras and all things Ole Miss. Tailgating treats — both food and drink, so tasty that entire cookbooks have been dedicated to the fare — are served up generously. Fashion statements run the gamut.

Two hours before kickoff, tailgaters cheer on their team and coaching staff as they traverse the Grove, making their way to Vaught-Hemingway Stadium on the Walk of Champions.

In 2019, Sports Illustrated declared the adorable white English bulldog, ever named Uga, the greatest mascot in college football history. The first Uga, pronounced “UGG-uh,” was a wedding gift to University of Georgia law school student Sonny Seiler and his wife, Cecelia, in 1956.

As Georgia lore has it, the Seilers showed up at the Sigma Chi fraternity house before the first home game, puppy in tow, wearing a child’s T-shirt on which Cecelia Seilers had sewed a felt “G.” The pup ended up at the football game and later was asked to be Georgia’s mascot. Until Georgia adopted the bulldog as a mascot name in the 1920s, there were other animals that served as mascots, including a goat on the sidelines during their first game in the late 1800s and a Boston terrier named Trilby in 1894. From 1944 to 1955, there were three bulldogs.

The Seiler line of bulldogs, however, has provided all Ugas to the University of Georgia for nearly 70 years. Uga X has a permanent air-conditioned doghouse that sits in Sanford Stadium near the Bulldog cheerleaders.

In 1909, the coach of the Arkansas Cardinals, proud of his team’s win over Louisiana State University, called his teammates “a wild band of Razorback hogs.” The name stuck, and a year later the student body of the University of Arkansas in Fayetteville voted on the Razorbacks as their official mascot. Since the 1960s, a living, breathing mascot has been at all home games; however, it’s not a native Arkansas Razorback but rather a Russian boar.

The calling of the hogs may well be one of the most recognizable chants in football and all other sports. A quick consultation of Google yields step-by-step instructions for performing the hog call. If you’ve had a hankering to join in, here are the basics: 1. Raise your arms over your head, yell “Woo” and wiggle fingers briefly. 2. Bring both arms down with fists clinched while shouting “Pig.” 3. Extend right arm while yelling “Sooie.” 4. Repeat these steps several times.

A short drive from Austin, Dallas and Houston, College Station, Texas, is home to Texas A&M University. The largeness of Texas is legendary, and it could be said that A&M football traditions follow suit, at least in the number of traditions. The Aggie Bonfire and the 12th Man are two of these.

For 90 years, beginning in 1909, A&M students built and burned a large bonfire on campus, traditionally each fall near Thanksgiving when A&M played its rivalry game with the University of Texas. The bonfire became an A&M-sanctioned event in 1936, and the fires grew larger and hotter each year. In 1969, the pile of lumber used to start the bonfire set the world record at 111 feet tall.

A tragedy occurred in 1999 when the not-yet-completed bonfire, with about 5,000 logs, collapsed, killing 12 and injuring 27 of the students and alumni working to prepare for the bonfire. The safer restructuring of the bonfire continued to be postponed, and there is no A&M-sanctioned bonfire on campus these days. However, since 2002 a non-university-sanctioned student bon-fire burns each year off campus and is attended by up to 15,000 people.

The 12th Man tradition at A&M began in 1921. The Aggies were paired against the Centre College Colonels, and A&M players had been plagued by injuries during the game’s first half. Sophomore E. King Gill, who’d left the Aggie football team mid-season to focus on basketball, was in attendance. Coach Dana X. Bible found Gill, waved him to the sideline and told him he likely would not have enough players to finish the game.

Under the bleachers, Gill put on the uniform of one of at least five injured players. He sat on the bench alone for the game’s remainder but was never called in to play. These days the A&M student body is collectively known as the 12th Man, standing throughout the whole game to signify their waiting to be called upon if the team needs them.

The cowbell is quite possibly the loudest and most resounding tradition among SEC teams. Die-hard supporters of the Mississippi State University Bulldogs have long celebrated great plays and ultimate team victories with the collective clanging of their cowbells.

The cowbell is said to have become a mainstay at MSU games in the late 1930s. How the bells came to be popular at games is not crystal clear, but there is a story that’s favored.

Legend has it that during a long-ago game in Starkville with State pitted against Ole Miss, a jersey cow wandered onto the field, and, later, State soundly bested its Rebel rivals, prompting students to adopt the cow as a good luck charm. It is said that students continued to show up at games with a cow in tow until the four-legged talisman was exchanged for a simple cowbell.

The cowbell met with resistance in 1974 when the SEC and NCAA ruled against artificial noise-makers at football games. Cowbells were effectively silenced until 2010 when SEC schools agreed to a compromise, and the cowbells clanged again.

Up in Tennessee, there’s a group of Volunteers fans known as the VOL Navy. On home football weekends in Knoxville, they gather at the docks outside Neyland Stadium on their boats and barges sized for partying. Casually clad in their beloved orange and white — and wearing rubber-soled boat-safe shoes — they prepare for pregame revelry. You don’t have to be an official member of the VOL Navy to find a warm welcome aboard. Old-timers and newcomers alike are greeted with Tennessee hospitality and delicious Southern fare.

History has it the VOL Navy first took float in the early 1960s when George Mooney, a broadcaster who was the voice of Volunteers’ football from 1952 to 1967, used his boat to travel to and from games because of the terrible traffic. In the days before docks, Mooney is said to have tied his boat to a tree and headed to the stadium on foot. These days, as many as 150 to 200 seaworthy vessels celebrate home games.